There are about 30 to 40 species of the Elm tree with the most diversity being found in Asia. There are 8 species which are endemic to North America and a smaller number in Europe. Some of the most familiar species are:

Elm wood is greatly valued because it has an interlocking grain. It has a natural resistance to splitting, bends well and does distort very easily. This makes elm wood very pliant. It is a natural choice to be used in the making of wagon wheel hubs, chair seats and coffins. Long, straight trunks provide the timber for keels in boat building. Ancient bows and longbows were made from elm wood.

One significant characteristic of elm wood is its capacity to resist decay when it is permantly wet. During the middle ages hollowed out trunks of the elm tree were used as water pipes.

The Romans used to plant elm trees in their vineyards to support their vines. Because the elm grows quickly with twiggy lateral branches they provided support and shade to the vines.

Elm trees have a long history as a source of fodder. The leafy branches are cut and used as food for animals.

Elm bark can be cut and boiled and provide sustenance. The seeds of the elm tree contain 45% protein and just under 7% fibre.

For Bonsai tree growing the Chinese Elm has a huge following among the Bonsai fraternity because it is tolerant to severe pruning.

The orchid belongs to a widespread and very diverse family of flowering plants which have fragrant and colourful blooms. Orchids can be found in pretty much every habitat. Orchid meter

Any caravan that is kept open to the elements all year round can become very susceptible to damp and damp related problems if proper precautions are not taken to prevent this. Caravan moisture meter

It is a good and important question to ask. There are differences between how different types of firewoods burn. Best firewood

Elm trees are deciduous and semi-deciduous and belong to the plant family Ulmaceae. They first appeared about 20 million years ago, originating in Central Asia. The tree flourished and pretty much spread over the whole Northern Hemisphere.

Elms can be found in many types of natural forests and during the 19th and 20th centuries they were planted for their ornamental characteristics in parks and gardens. The Elm can grow to a great size and age, but recently many have succumbed to Dutch Elm Disease.

In the second half of the 20th century Dutch elm disease devastated elms throughout much of North America and Europe. The elm bark beetle transmits a micro fungus. The fungal spores enter the tree through the wounds that are caused by the beetle and attack the vascular system of the tree. The tree then responds by producing tyloses which in turn block the flow from the roots to the leaves.

Elm phloem necrosis is another disease which affects the elm tree badly. It is spread by leafhoppers or by root grafts. It is a very aggressive disease and there is no known cure for it. The disease affects the inner bark of the tree which in turn prevents the flow of water and nutrients within the tree.

The elm leaf beetle is the most serious threat to the elm tree. It decimates foliage.

The Treaty Elm - In Philadelphia, Pennsylvania William Penn entered a peace treaty in 1683 under this tree.

The Washington Elm - In Cambridge, Massachusetts George Washington took command of the Continental Army in 1775 under this tree.

The Liberty Tree - In Boston, Massachusetts was the meeting point for the resistance to the rule of England over the colonies.

The Logan Elm - In Ohio it reached a height of 20 metres with a trunk circumference of 7 metres. It died in 1964 from storm damage and being weakend by dutch elm disease.

The Philipsburg Elm - In Quebec it was a 280 year old tree that had to be unfortunately cut down in 2009 because of dutch elm disease.

This has high water content and hence tends to smoke a lot. Requires long seasoning. 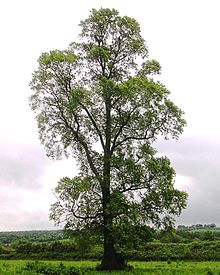