Hickory is used as a food source by many different larvaes;

Hickory wood is a very hard wood that is also stiff, dense and very shock resistant. Individually there are woods which are stronger than hickory and harder than hickory. But no other wood combines strength, hardness, stiffness and toughness in the same manner.

Baseball bats used to be always made from hickory but these days ash is taking its place.

As a firewood hickory is the choice of many especially for their wood burning stoves. Hickory has a high energy content. It gives a High and long lasting heat. One of the best firewood out there.

Hickory is used for smoking cured meats and is a popular choice of wood for barbeques as it adds flavour to meat.

Because it is durable and has character in its appearance, hickory is used for wood flooring.

A syrup, similar in taste to maple syrup, is made using the bark extract from shagbark hickory. It has a smoky and slightly bitter taste.

The orchid belongs to a widespread and very diverse family of flowering plants which have fragrant and colourful blooms. Orchids can be found in pretty much every habitat. Orchid garden meter

Any caravan that is kept open to the elements all year round can become very susceptible to damp and damp related problems if proper precautions are not taken to prevent this. Moisture meters for caravans

The garden moisture meter helps any avid gardener to measure and monitor many different conditions to ensure that they can maintain healthy growing conditions for both indoor as well as outdoor plants. In order to have healthy thriving plants The garden soil moisture meter

It is a good and important question to ask. There are differences between how different types of firewoods burn. Best firewood

Hickory is a tree from the genus Carya. This genus has 19 species of the deciduous trees that have pinnately compound leaves and large nuts. There are 6 species native to India, China and Indochina and 12 species are from the U.S.A. The flowers of hickory are small in size and of a yellow green colour which are produced in Spring in the form of catkins. Hickory is wind pollinated and self incompatible. The fruit produced is an oval nut, the walnut.

Walnut seeds are a source of nutrients. especially protein and fatty acids. When walnuts are collected they have to be processed and stored correctly. If they are not stored correctly they become susceptible to fungal and insect infestations.

The walnut fruit is found encased in a green and leathery husk. This husk cannot be eaten. When harvested a wrinkly walnt shell remains when the husk is removed. Within this shell is the tasty walnut kernal. 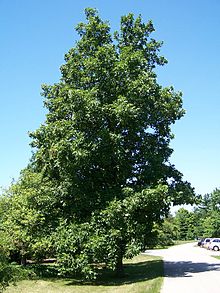 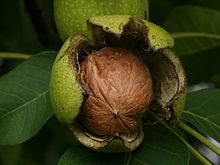 Walnut encased in its husk

The best temperature for storing walnuts is minus 3 to zero degrees C with low humidity. Temperatures above 30 C and a humidity of 70% can ruin walnuts at a very quick rate. Freshly harvested walnut seeds that have a water content level of between 2 to 8 % give the best flavour and colour. Storing walnuts is a particular task that requires the use of a hygrometer and a moisture meter.

The walnut is a nutrient dense food. In the walnut is a source of carbohydrates, protein, unsaturated fatty acids, fiber, calcium, iron, zinc, vitamin B, Omega 3 and Omega 6.