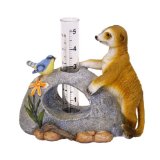 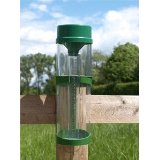 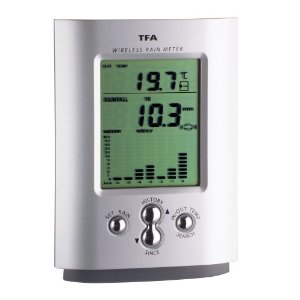 Examples Of The Rain Gauge

The rain gauge is an instrument used to measure rainfall over a certain period of time. Rain gauges are used mainly by meteorologists and hydrologists to achieve a measurement of precipitation over a certain area in a monitored time scale. Rainfall depth is usually measured in millimeters and the unit area is usually measured in one meter squared areas. The result being the measurement of total rainfall. As a surmise, one millimeter of measured precipitation is the equivalent of a litre of rainfall over a metre squared of area.

The rain gauge usually consists of a tapering funnel which allows any rainfall collected to run into an enclosed cylinder receptacle or bottle. Here the rainfall can then be measured. The rain gauge will be set up above ground with the funnel rim up to 35 cm above the ground surface. Depending upon the technical capabilities of a particular rainfall gauge, there are models which can be calibrated to give instant measurements of the amount of rainfall that has fallen. Less technically advanced rain gauges results in the operator having to calculate the depth of water in the receptacle and the dimensions of the collecting funnel to obtain an accurate reading of rainfall.

The majority of rain gauges will measure precipitation in millimeters. Other scales which can be used are centre meters and inches.

The read gauge reading can be taken manually or by an automatic weather station. The frequency of the readings will be dependant upon requirements of the use of the readings and the requirements of the particular agency that is doing the rain collection. In certain countries paid weather observers are employed along with many volunteers. This is particularly so in sparsely populated areas around the globe.

The precipitation that has been collected is not usually kept. But in certain cases and areas further tests are taken on the rainfall to ascertain the amount of pollutants in the rainfall.

As good and accurate as rain gauges can be, they do have their limitations. There is no way that a rain gauge can obtain an accurate rainfall reading in a hurricane for example. Rain gauges are also limited to a local area.

In cold and freezing weather conditions the rainfall can freeze. So the water will not pass through to the measuring device and so you end up with an inaccurate reading.

Any rain gauge needs to be situated in an open area where there are no obstacles like trees or buildings which can affect the results.

This rain gauge from TFA Dostman Gmbh is a cable free rain sensor that has an additional alarm. The data capabilities it gives you are display of total rainfall, the last hour of rainfall, last 24 hours of rainfall and it even keeps records of rainfall over a period of up to several months.

It can be set up to stand up or even be hung up in a place suitable to your requirements. Infact it is so simple to set up and install due to the fact that there are no cables required. Perfect for the garden and anything agricultural.

This ClimeMET rain gauge is the traditional form of rain gauge. Simple to use and read, it will give you an accurate rainfall measurement. The measuring tube on the inside is in 0.5 mm graduations and has a holding capacity of 25 mm. The device can be left for quite a while to collect rainfall meaning that you can calculate rainfall over an extended period of time.

Just like the moisture meter, the rain gauge is available in several different types. There are graduated cylinder types, weighing types, tipping bucket types and just simple buried pit collection types. Each particular version of the rain gauge has both it’s advantages and disadvantages.

The weighing rain gauge is a large storage bin which collects rainfall and then is weighed to record the mass. Certain types of the weighing gauge measure the water mass via a pen on a rotating drum or with a vibrating wire which is wired up to a data logger. These are advantageous in the fact that they do not underestimate any cases of intense rain, whereas tipping bucket types do. They are also able to measure hail and snow. They do require general maintenance and upkeep though and hit the wallet harder with their higher price tags.

It is also worth mentioning that there are weighing rain gauges that come fitted with devices that can measure the quantity of chemicals in rainfall as well. This is particularly useful for scientists and anyone studying the effects of greenhouse gases in the atmosphere.

The tipping bucket rain gauge consists of a funnel to collect and channel the rain in to a seesaw container. Once a pre set amount of rain falls, the lever on the device will tip and dump the rain which sets off an electrical signal. The operator can then record the number of signals to obtain a rainfall measurement.

This type of rain gauge is not as accurate as a standard rain gauge because rainfall can stop before the lever tips. This means that when the rainfall begins again it may only take a couple of drops of rain to tilt the lever giving you a false reading on your preset numbers. The advantage of the tipping bucket gauge is that it can pretty much work well with any type of rainfall, whether it be light or actually in the form of snow. A tipping gauge can also be fitted with a weighing capability.

The optical rain gauge uses technology to record rainfall. It will consist of a row of collection funnels that have a laser diode and a photo transistor detector below them. When water is collected and a drop mass has been obtained, the drop will drip from the bottom and fall in to the path of the laser beam. The result being that enough light from the beam will be scattered and be detected as a flash of light. The flashes from the photo detector are then read and recorded.

Principle Of The Rain Gauge

Add a little character to your garden with this novelty rain gauge from Primrose London. It can also be used to encourage children to get involved in science projects. The rain gauge is acrylic and measurements can be read in either mm or cm.

A garden rain gauge is a very important and cheap way in assisting with keeping your garden both green and fresh. It can be used on your vegetable, flower borders and even on the lawn. With one you will know whether your garden requires additional watering or not. Garden rain gauges come in all shapes and sizes, some with novelty designs that will add a little fun to your garden design.

Over the years decorative rain gauges have grown immensely in popularity. Not only do they add an interest to your garden, but they also perform all the functions of a contemporary rain gauge. Such novelty rain gauges can be found in the form of wild animals and even caricatures. They can be situated in any part of the garden to add to a theme. Though the same principals of setting up a rain gauge do apply. Ideally you want a decorative rain gauge to be set up on a higher surface in order to obtain more accurate readings. They also need to be set where they are least likely to suffer from “contamination” such as water dripping off a tree branch. So for that little bit of extra design to the garden, check out a novelty rain gauge. It is attention to small details that always enhances a larger area!